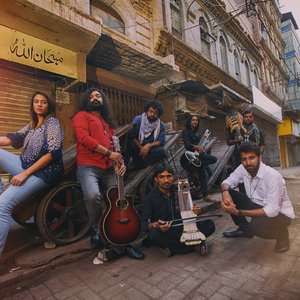 Sounds of Kolachi is undoubtedly the next big thing in the Pakistan music industry. Dubbed by industry experts and critics alike as an ensemble good enough to rival any great bands of the past, it is a contemporary Fusion Orchestra comprised of some of the finest musicians in the country.
...

Sounds Of Kolachi appeared on the horizon of the Pakistani music industry in 2014 primarily as a live act. The Orchestra started creating vibes all over the country in a very short span of time. Known for its energetic performance and amazing stage charisma, SOK is all set to start performing all over the country in preparation for the launch of their revolutionary new album being produced by Mekaal Hassan. They have been earmarked for the next season of Coke Studio.

Sounds of Kolachi: 10-Piece Super Group Tours the US This Spring As Part of Center Stage 2017

Like an Indian Ocean blast from the seaport megacity it calls home, Sounds of Kolachi, a new 10-piece super group of vocalists and instrumentalists from Karachi, blurs raga and Western harmony, counterpoint and South Asian melodic lines, all without losing the groove. In this instantly listenable ensemble, South Asian classical instruments like the sitar and bowed sarangi are on equal footing with electric guitar and rock rhythm section. Guiding the journey, composer, theorist, and singer Ahsan Bari spins outrageous, bluesy, modal riffs, boosted by a quartet of male and female voices.

An academic junkie and rock head, Bari started playing music with Gravity, one of Pakistan’s underground rock bands a decade ago. He gave up studying quantum physics for eastern classical vocal studies, and entered Pakistan’s National Academy of Performing Arts (NAPA). “A guitar professor at NAPA introduced me to texts and scores,” Bari recalls. “I was mesmerized by Bach’s organ work. How could one think of so many different lines at the same time? All of that stuff got intense when I started studying the basics of jazz composition. I started analyzing Coltrane. I took up guitar as my primary tool.”

After graduation, Bari joined NAPA’s faculty and began composing, teaching, and performing all over town. “My music got really complicated, the time signatures, the harmonies and chords. I started to learn tabla theory. It all mixed up and got really complex.”

Two years ago, says Bari, “I started listening to all this great folk music that was being recorded in Jamshoro,” 90 minutes from Karachi on the banks of the Indus River. When The Sketches, the band that was supporting these folk musicians and presenting their work, called and asked Bari to produce for them, he packed up and headed there for three months with the sarangi and sitar players who are now core members of Sounds of Kolachi.

Inspired by his experiences, Bari returned to Karachi eager to pare down, to distill, gathering a fluid (and increasingly large number) of music pros and former students to create simplified if layered and muscular musical compositions. Sounds of Kolachi took off in 2013. “We’re a project, a process – experimenters” explains Bari, who will lead a 10-piece configuration of Sounds of Kolachi to the U.S. for its American debut tour in the Spring of 2017 as part of Center Stage Pakistan.

Like the west’s Son Lux or The National, Sounds of Kolachi mixes classical, avant-garde, jazz, and rock in ways that ravel and synthesize genre boundaries. They do so by tapping into the spirit of Karachi, their megacity home, exposing global influences, nurturing esthetic diversity, and creating new bold, hybrid forms.

Now in its third edition, five acclaimed contemporary music and theater ensembles from Algeria and Tanzania will travel to the U.S. between July and November, 2016; two bands from Pakistan will tour in the spring of 2017. Each group undertakes independent, month-long tours around the country to perform, interact, begin meaningful dialogues with Americans, and share these experiences with friends and fans at home. Center Stage artists perform and engage with audiences onstage and online providing positive and popular avenues of engagement to build mutual understanding through shared culture and values.

Each tour includes a range of community engagement activities, such as performances, workshops, discussions, artist-to-artist exchanges, and community gatherings.  To date, 17 ensembles from Haiti, Indonesia, Morocco, Pakistan and Vietnam have toured the United States, focusing on interactive engagements in diverse cities and towns across the country.

Center Stage is a public diplomacy initiative of the U.S. Department of State's Bureau of Educational and Cultural Affairs, administered by the New England Foundation for the Arts in cooperation with the U.S. Regional Arts Organizations, with support from the Doris Duke Foundation for Islamic Art. Center Stage Pakistan is made possible by the U.S. Embassy in Islamabad, Pakistan. General management is provided by Lisa Booth Management, Inc.